Nomad Revelations is a travel blog written to inspire and empower “independent” travelers and “audacious backpackers” through stories of travel, adventure, and exploration.

Hi, I’m João! Welcome to my blog, where I share my travel experiences and adventures in off-the-beaten-track travel destinations.

You may notice that the main intention of this blog is to encourage and motivate other travelers to discover interesting and unknown places around the world.

Exotic itineraries and ideas to inspire independent travelers. Are you ready to think outside the box for your next adventure?

Best travel blog about exciting journeys into more than 130 countries across Africa, Antarctica, Asia, Europe, North to South America, and Oceania. Traveling since 1999.

The greatest aspect of traveling is the ability to witness all elements of life come together into a kind of foreshortened timeline. It’s as if we are simultaneously time traveling through our past and future. Secured by its focal present, collectively combining all lessons into our own being at each point in time and in each present moment.

2001 – Solo backpacking and hitchhiking travel around Central and Eastern Europe in countries such as the Federal Republic of Yugoslavia, Romania, Bulgaria, Czech Republic, Slovakia, and Poland.

2003 – Solo backpacking trip around Eastern Europe and the Balkan countries such as FYR of Macedonia, State Union of Serbia and Montenegro, Bulgaria, Turkey, Greece, and Poland.

2003 – Solo hitchhiking trip from Portugal to Senegal. Flying back home on a fish cargo plane departing from Mauritania.

2004 – 13000km/8077mi car overland expedition from Portugal to Senegal and Gambia via Spain, Morocco, and Mauritania. Detained for 2 days by the Moroccan forces on the wall near Gueltat Zemmur separating Morocco and the Polisario-controlled areas (Free Zone, nominally Sahrawi Arab Democratic Republic).

2004 – Solo backpacking travel in Central Asia around Kazakhstan, and Uzbekistan. Evacuated out of Tashkent due to suicide bombers strike. Flew to Iran where I stayed to practice local Kung-Fu To’a. Overland to Turkey by bus.

2008 – Solo hitchhiking and adventure trip in Mali – West Africa, crossing all the way to the famous city of Timbuktu.

2009 – 4X4 overland expedition in the Mauritanian Sahara Desert along with the land mine areas of the railway between Nouadhibou and Choum.

2009 – Solo backpacking around Eastern Europe around Romania, Moldova, Ukraine, and Transnistria, a country that doesn’t exist.

2011 – Celebrating the independence days of the newly born African country, being the first traveler crossing the land border to travel to South Sudan.

2011 – Hitching from South Sudan to Uganda via the Democratic Republic of Congo where I was rescued in the jungle by the Moroccan UN peacekeeper forces after being surrounded by a mob holding machetes. Furthermore, on the trip, I got hospitalized after contracting Malaria.

2012 – 6500km/4000mi banger rally from Hungary to Kyrgyzstan while participating in the Central Asia Rally.

2013 – Backpacking across the Guianas, through Guyana, Suriname, and French Guyana in South America.

2014 – Two-week Antarctica expedition crossing the 66º at the Antarctic Circle.

2014 – Backpacking across all of Central America from Panama to Mexico.

2018 – Visiting Mosul in Iraq, six months after its liberation from terrorist groups.

2018 – Exploring the Hadhramaut Region in Yemen.

2020 – Exploring Syria and crossing the M5 highway of death through Idbil Province during Russian airstrikes and live tank shelling on Nairad Axix in Idlib. 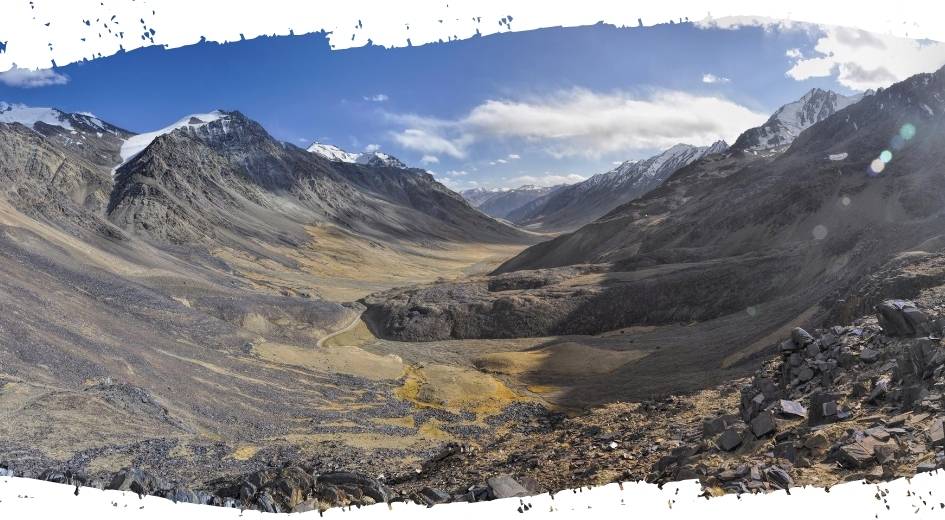 Countries where I spent more time:

How long did I spend on the road with a camper van?

I’ve made a few van life trips before. But this last one took me one full year when I drove 35,000 km crossing Russia, and Central Asia down to the Middle East in Iran, Iraq, and Turkey.

What type of van did I have?

Was it dangerous to drive Tajikistan, Iran, and Iraq with a European camper van?

No. I’ve never had any type of dangerous situation during my year on the road with a camper van. I spent 1 month in Tajikistan, 2 months in Iran (a very safe country that I don’t even know why people mix Iraq and Iran together in the same sentence concerning safety), and 1 month in Iraq.

Did I travel alone for one year?

No. I traveled with my wife and 2-year-old son. He turned three years old in Serbia when we were almost finishing our trip in August 2018. He stopped wearing diapers somewhere in Iran.

What happened to my 4×4 Mercedes camper van?

After I came back from my trip, I sold my 4X4 Sprinter. Why? Because I bought it in Poland, and I live in Morocco. Due to different reasons, bringing the truck back home to Ouarzazate was out of the question. I sold my van through the online website Mobile.de. I got more than 90 people interested and I finally sold it to an Austrian guy.

With a notorious passion for driving, I am emphatic about heading out on the road and traveling. With the ability to decide where to go and where to stop, I have a full sense of freedom while on the road.

Saudi Arabia just recently opened its doors to foreign tourism. This unknown country has plenty of natural and historical wonders that will make most adventure travelers anxious to visit.

Saudi Arabia is one of the most photogenic desert countries that I’ve ever visited and is packed with breathtaking photo locations.

Iran, what else can I say about this amazing country? The blend of welcoming and friendly people, an incredible variety of landscapes, and a vast historical heritage make of the Persian nation, a perfect travel destination. I visited Iran four times and was able to explore the country extensively for four months.

Check out my pages about traveling in Iran

Who is the author of this blog?

My name is João Leitão and I was born in Lisbon – Portugal – back in 1980. My UN visited countries list goes up to more than 130. With a degree in Visual Arts, I like adventure travel, photography, and cooking.

Human contact and communication are crucial, so interacting with local people during my travels is very important to me as an individual. Being on the road fits my personality perfectly, and this blog is my way of sharing those best travel experiences.

I am a guy who defines himself as curious. Basically, I am a sponge, a boy with a backpack exploring the world and, absorbing new experiences and new encounters daily: architecture, vestiges of the past, religious beliefs, flavors, aromas, languages and dialects, and musical expressions.

Although I moved to Morocco in 2007, so far I also lived in countries such as Finland, Kazakhstan, Morocco, Turkey, Ukraine, the U.S.A., and more recently Brazil, and Poland. Now that you know a bit more about me, here I am to welcome you to my blog, where I gathered travel tips after 20 years of traveling the world and inspiring narratives to motivate you to hit the road!

Why is this blog about adventure travel?

While the concept of adventure travel differs from person to person, indeed I do have blog posts about less traveled countries such as Yemen, Saudi Arabia, Afghanistan, Somalia, Congo, etc. I personally like to explore places that are off the beaten path and that are usually off-limits to normal travelers.

What is the biggest adventure I’ve ever had?

Well, it’s quite difficult to analyze trips after all these years on the road. Many travels I made somehow slipped into oblivion, and only a few still resist time. Back in 2010 while traveling from the newly independent country of South Sudan, I crossed the border to Congo, and furthermore to Uganda. This was a quite harsh trip, where I had encountered not very friendly people with machetes in the middle of the jungle. Finally, I got protection from the Moroccan Blue Helmets, and I crossed the wilderness inside a U.N. heavy-armed Hummer through dangerous areas. I furthermore got Malaria and was in a D.R.C. hospital where I receive treatment for this infamous disease. travel blog

Since when did I write my travel blog?

I am blogging since 2003! Starting a travel blog came into my mind when I had my first photography website back in 2001 when I began my photo project called People of the World. I was around the world portraying people from different countries. In 2003, I started sharing my adventure stories and travel photographs on the Internet on a popular travel website that is now extinct. Finally, in 2006 I opened my own domain – this one you are now – and commenced writing more information about the places I had been in since 1999. I first started writing in my native language Portuguese, and in 2010 I decided to open the English equivalent “Nomad Revelations World Travel Blog”. There are other travel bloggers that I like such as Expert Vagabond and Against the Compass.

How many countries have I been to?

As of December 2019, I have visited 127 UN countries but also about 20 non-recognized countries or autonomous territories spread around the globe. I would have finished all the countries in the world if I wouldn’t repeat my trips and always come back to the places I really like in order to explore in-depth. Mauritania I’ve been 7 times, Uzbekistan 5 times, Turkey 14 times, Iraq 4 times, etc, etc…

How long have I been traveling? How long I was on the road?

I can make an average of 6 months on the road per year. This means, that I’ve spent around 10 years on the road in the last 20 years.

What is the main focus of my travels?

I like to focus on people, history, and nature. I somehow have a preference for dusty and warm countries, so it is fantastic to be able to visit an ancient desert city with friendly people. I like to visit UNESCO World Heritage Sites I now count 329 in total. I love petroglyphs and castles.

What are my top five most preferred countries?

Morocco » A colorful exotic kingdom full of welcoming and positive people, with ancient history and landscape diversity.
Turkey » Historically rich and diverse, amazing food and friendly people.
Portugal » My home country, full of history, great food, humble people and the country in Europe with more heritage per square km.
Gorno Badakhshan Autonomous Region of Tajikistan » This mountain region gets my attention due to the incredible landscapes and a very specific culture.
Brazil » Friendly people, good food, incredibly diverse, the Amazon regions and the Portuguese heritage architecture spread all around its territory.
And a few more? Yes of course: Afghanistan, Sudan, Uzbekistan, and amazing Iran.

Which is my most preferred country for travel and why?

Morocco is my top favorite country to travel to. Although I live and work in Morocco for more than 12 years, every day I feel that I’m on the road. The colors, the smiling people, the rich gastronomy, the breathtaking landscapes, and above all is the safety and feeling welcomed by Moroccan people on a daily basis

What is the single best lesson I have learned about the world during my travels?

Traveling means exploring the unknown. I don’t really travel to discover myself since at every stage of my life I knew what I wanted, or the goals I desire to achieve. I travel to see new things and to meet different people and cultures. Basically, I think I travel to broaden my horizons. That’s it. I get great satisfaction from being on the road, especially when I have a bit of adventure on the go. During traveling I learned that we all smile, cry, love our family, and like to eat, have fun and enjoy life. Travel can truly reinforce and challenge our convictions greater than any experience. We are pushed to the limit in understanding humans.